Dangerous dogs and what to do about them is in the news again lately.
"They" are discussing the problem of mauled babies, aggressive curs, dogs bred for fighting etc. Microchipping and owner registration come high on the list of solutions. 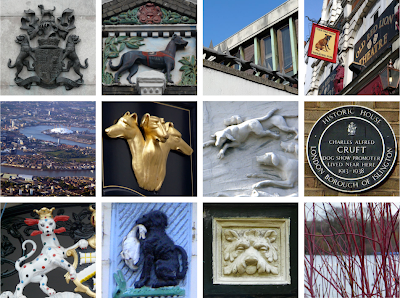 Dog-related pics taken in, around and above London
Today's dogs don't want to be aggressive, but some have been specifically bred to be so. It seems to me that the problem of aggressive dogs comes down to ownership in the first instance.
I have just come back from another holiday in Turkey where there are many lovely street dogs of all shapes and sizes. In all the years I have been going there I have never seen any aggressive behaviour from them. Most pet dogs are also allowed to go out on their own to mix with the other dogs. It's really lovely to see such calm friendly, relaxed animals, hanging out with their mates, or running off somewhere doggily important, coming home later for their dinner. Mostly they fall asleep under chairs or in the middle of the road!
They have managed over the years to 'train' themselves to get what they want from humans (food and companionship) without the need for leashes or lessons. If another dog they don't like comes near, there is a raising of hackles, a bit of a staring competition and some low growling, then one backs down and wanders off.
The only mildly-aggressive behavior I have seen concerning Turkish dogs is when owners have their dog on a lead and another dog wanders over to say hello and have a friendly sniff... the owner of the leashed dog starts pulling their dog back thus sending out messages that the owner is scared and needs protecting from this invader. It's a vicious circle. The leashed dog usually barks and strains at the lead whilst the free dog stands looking confused, then wanders off to find some dog better to play with.
I watched this exact situation happen last week when a man with a beautiful big, soppy 6-month old dog sat down for coffee at a seafront café but he "had to leave" because she was "badly behaved" and was "never any good near other dogs". A good example of how an aggressive animal can be created. I tried to talk to the man to explain that his tugging on the lead was sending out the wrong messages to the dog, but he didn't want to hear me, preferring to wallow in the perverse idea that he had a difficult animal to contend with and was some kind of super hero having to deal with her. I found it so sad. Especially for the dog, who was just a big puppy and was missing out on doing dog stuff.
I have also not noticed any dog faeces on the pavements in Turkey. Nor in the roads or on the beaches. This is probably because dogs much prefer to leave their messages in special corners where other dogs will find them. Sort of canine letterboxes. The dogs who only get taken out on a lead once or twice a day have been holding onto their payload for hours and must be busting by the time it's walkies. Having had no other dogs around to learn from, they often drop it at the first sniff of fresh air which, unfortunately, might be in the middle of a pavement (don't get me started about those cruel and insensitive owners who then drag their dog along whilst the poor animal is performing an act of nature).
I like dogs.