Holloway Road then and now (2)

Continuing from my recent post about Pugh Bros, this entry looks at the changes to the buildings to the left of it in the Victorian parade that links two pubs; The Bailey and The Wig & Gown.
In 2008 I started taking photos along the Holloway Road – the architectural details that no one seems to notice or appreciate; the kind of things that get overlooked or ripped out in the name of 'progress'.
The image below, top left was taken at that time and shows most of the old windows with their original multi-panes contrasted with the modern cheaper, kind. But, returning to this image today, I now cannot work out which street numbers those windows belonged to. Five years and so much has changed. 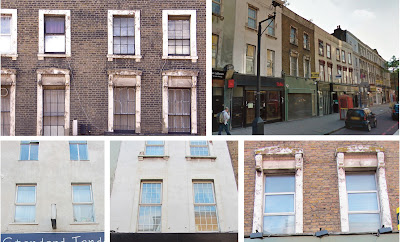 As you can see by the google streetview, top right (which also shows that almost all of the bricks in this terrace have now been coated in render and/or painted over) most of the windows have been replaced with modern versions.
Whilst I can understand the need for better insulation and double glazing, especially when living on a busy main road, I think it's a crime to put in replacements that quite evidently are not suitable or sympathetic, especially as there are very good wood or UPVC equivalents available these days. I know, because I had my own victorian sashes replaced; they weren't expensive and they look great.
The three images on the bottom row, above, further highlight what I mean here – the new windows are mostly just plain glass. A hint to the correct style has been made in some cases by introducing fake divisions, but scant thought has gone into this as they have too many sections (try comparing the old with the new). And notice how a lot of the pediments and architraves have been removed. It all makes for a very dull and uninteresting façade. 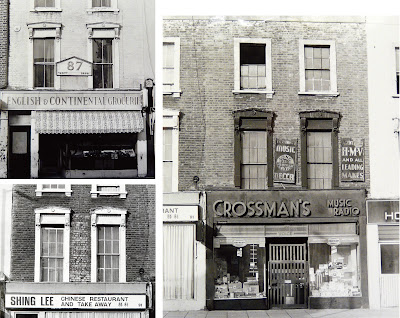 The pics above, from the mid-1970s, show how the original Victorian sashes were still in place (though probably draughty!). Note the lovely old signage on the three shops: No.87's hand-painted lettering (with ‘groceries’ squashed in at the end), Shing Lee’s then modern sign (the nasty shape of things to come) with an earlier hand-painted advertisement on the wall above which reads (something like): 'Builder, decorator (xxxx?) and plumbing in all branches', and Crossman’s music and radio shop with its deep windows and lovely old signs for HMV, Decca and Ever Ready. See the comments below for more about Crossman/Grossman.
On the subject of bad window replacements, further along the Holloway Road, on the rounded corner above no 201, there are some that are so bad they actually bring a smile to my face.