Four years ago I was walking along Dalston Lane and I turned to see a fresh mural depicting six white female stick figures, with one carrying a baby (see top left within the montage below.)
I took a couple of photographs. A fella standing next to me on the pavement asked me if I liked it and I said, 'yes, of course', so he told me that he was the artist and had just finished it. I think at the time I just assumed this was a commissioned piece, so I thought nothing of it and wandered off. I didn't stop to chat, and as friends will tell you, that's rather out of character for me!
Within weeks I realised that I had been in the presence of genius as I started to spot Stik's shy, lonely, furtive figures throughout north and central London, peeking out from windows, or sleeping or smoking in backstreets. People were starting to 'collect' his work on Flickr.
Stik spotting?  Spot Stik?
Some of my own collection is shown below, many of which have now been sadly overpainted, including the ladies and the bookshop. But such is the way with street art. And that's how it ought to be.
The news is that Stik has recently invaded South London and, in conjunction with last week's Dulwich Festival and the Dulwich Picture Gallery, he has created some street art based on classical paintings hanging within the gallery. His reinterpretation of Franceschini's Guardian Angel is near Push Studios in Blackwater Street, and more re-workings can be found in the surrounding streets on walls and garage doors.
I am kicking myself for a second time... last weekend Stik led a (sold out) tour of these works but I found out about it too late. Grr! 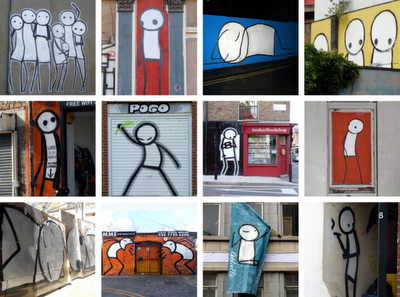 Email ThisBlogThis!Share to TwitterShare to FacebookShare to Pinterest
Labels: art and artists, galleries and museums, graffiti