On Monday morning I went to Greenwich to display some of my clay pipe jewellery in Bullfrogs shop window in Church Street.
A friend came to meet me there and we went for lunch in a nearby restaurant where I bumped into another friend's daughter who, unbeknownst to me, is studying at Greenwich Univerisity. Lucky girl to be in such a great location, and what a nice surprise to see her, as I don't think I'd set eyes on her since she was about 15.
It was a glorious day so after lunch I went for a wander... 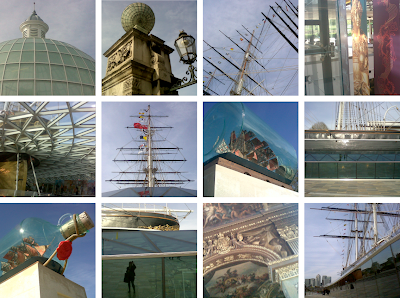 In the park I admired the construction of a labyrinth of metal poles that will become the controversial Olympic equestrian venue. Outside the Royal Maritime Museum I spotted the oversized ship in a bottle that was previously on the 4th plinth in Trafalgar Square. I went inside the museum and was a bit disappointed. I was engrossed in the gallery with the pics of the then and now stretches of Wapping and Bermondsey, but leaving that room I couldn't find anything else to inspire me. Did I miss a trick somewhere? If so, the signage is appalling. And I had hoped there would be more and larger maps and charts for sale in the shop... but I digress; this is supposed to be about nice things...
A raspberry ripple ice cream and then to The Painted Hall, 'the finest dining hall in Europe', no less. I had been there before for a Christmas do a few years back (actually, it was the company my lunch friend works for) but, although we all had that 'wow' moment when we entered the room, we then became preoccupied with all the food and drink. But mainly the drink. The hall is like an OTT set for a bizarre film; you feel as if you are actually in a painting. Every inch is covered with fantastic images and trompe l'oiel.
Then I popped into the beautiful Old Royal Naval College Chapel and admired its repetitive yet soothing interior. There was just time to pop into the ORNC museum. I just love the big relief map in the centre of the main room. In fact the whole of that room is jam-packed with so many interesting and interactive and informative things. It was closing in ten minutes; that's the third time that's happened to me!
So to the Cutty Sark. I like what they've done. I like the way the glass surround evokes the sea. I like the reflections it creates. It was closed so I couldn't go inside but I notice that the roof of the shop area is practically the same as the new roof at the Kings Cross Station, which is almost the same as The Great Court at the British Museum. couldn't they have designed something different?
I admired the view across to The Isle of Dogs and thought about walking through the foot tunnel. I noticed that the tide was low and I could see shingle on the other side beckoning me, but I had the wrong shoes on. So I got on the DLR and headed home instead.
What a nice day.