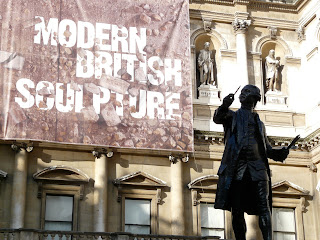 I was going to put off writing about this for a while but having just read Ossian Ward's review in this week's Time Out I just had to say how much I agree with him, in particular the lack of cohesion, the chosen pieces, the absent modern artists and the 'compare and contrast' of the old fancy metal floor grilles and simplistic modern art – in some rooms I'd say the humidty boxes in the corners were often the most interesting things in there!
Don't get me wrong, there are plenty of fabulous modern works of art in there but, for me, they are few and far between.
I love love love Jacob Epstein's work – and his Adam is there. The work shows great strength and movement (if you know what I mean). Though I'd like to have been able to have seen Adam's face. Perhaps a well-placed mirror could have been used?
Hirst's 'Let's Eat Outdoors Today' takes up almost a whole room. It's basically a biological study and, to my mind, not art. (Yeah yeah, begs the question, what is art?). I strode straight past it. No flies on me! Apparently it's one of four works he'd save from a burning building. He'd probably have to get his team of minions to shift it for him. And then hopefully he could sit inside it and turn himself into art. I'd go to see that.
Another room is packed full of treasures from the British Museum. Ancient pieces are contrasted with those from the past century, yet all of them display great artistry and craftsmanship and highlight how over-blown, cheap and transient a lot of the modern stuff is. Size isn't everything.
Which reminds me... the Fourth Plinth... need I say more?

Email ThisBlogThis!Share to TwitterShare to FacebookShare to Pinterest
Labels: art and artists, galleries and museums