Hanging on in there in York Way

Just north of the railway line at 186 York Way, over the road from what used to be Maiden Lane railway station, just one old Victorian building remains squished in amongst the new builds.
How very strange.
And it's sort of ironic that it's home to an estate agent. 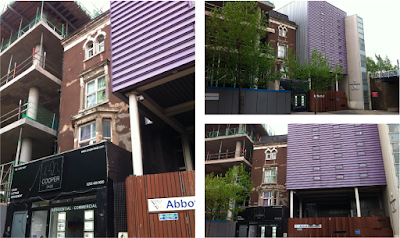 This district has seen big changes and lots of redevelopment in the past few decades. It used to be a very smelly area known as Belle Isle – a rather misleading name considering the stinky, noxious, businesses that were – most of the companies here were linked in some way to the nearby Caledonian meat market.
My old directories show me that for at least the period 1895–1915 this particular building was occupied by Harris, Barber & Son, horse slaughters. And to the rear there was 'Pleasant Grove'. There's still Vale Royal just down the hill. Maiden Lane, the earlier name of York Way/Rd, was actually a ref to 'midden' meaning a rubbish heap.