This is a mixed bag abou the northern end of Eversholt Street, NW1, near Mornington Crescent Station. 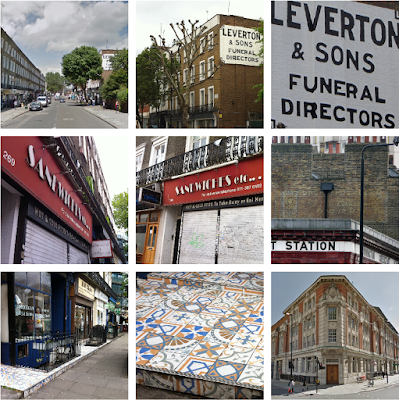 Working along and down row by row of the pics:
A Google street view of the top section of the road shows Leverton & Sons sign on the right. A few years back it was re-painted. It's an appalling renovation. enough said.
Until approx 15 years ago the opposite side of the road was, just like Parkway a little further north, a parade of useful, independent shops which included a great tapas bar and the cafe shown here with the red sign.
Sandwiches etc belied its basic name and plastic sign because inside was marvellous. A friendly and hardworking Italian family ran this place for decades. It had fixed high back wood and padded seating which fitted in four groups of six people and they served up the most delicious fare including the best toasted ciabattas and focaccia I have ever tasted. Everyone I took inside loved it and requested to make a return visit. And the coffee was excellent, being as it was made my the grandfather who had been a barista for decades. They probably weren't even called baristas when he started out.
Sandwiches etc started to lose trade when Costas and Starbucks etc opened outlets along nearby Camden High Street. This was the same period as when the big supermarket chains began opening up mini/local versions everywhere which also helped  to change the face of this lower end of Camden Town completely. At that time I was an occasional freelance at a publishing company just around the corner within Greater London House/Carreras Building and rather than just nip around the corner to Sandwiches etc where a cappuccino was a mere 90p and would still be frothy after running back with it across the road and up two flights of stairs, work colleagues would instead march up the high street to one of the new places where they paid twice the price for lukewarm milky water. When I tried to tell them about the café they looked at me like I was the mad one.
The shop has since stood empty all this time. So sad on many levels.
The last pic on the middle row shows a faded old advertisement for George Clarke & Sons breakfast food above MC station which I expect many people have never noticed. It is, as they say, hiding in plain sight, though would have been very bright and visible to people on buses and trams heading southwards back in the day. Traffic today now flows only on the opposite direction.
The bottom pic shows a long tiled step in front of a shop near the café. I am wondering if this was the tapas bar, though in my mind that was further south. Any feedback welcome.
And finally the magnificent old post office at the junction opposite the station. No longer in use as such.
That'll do!

More Camden ghostsigns here including the Leverton one.