Everybody reads the Daily Express

Last month I was in the Willesden area and so went to check on one of my favourite ghostsigns. 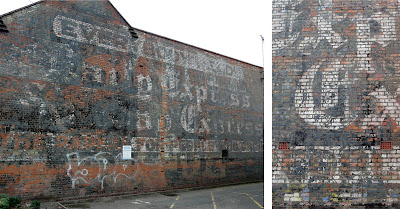 I was glad to see that apart from a bit of graffiti at the bottom nothing much has changed since I was there in 2009. Phew!
This old hand-painted sign for Express newspapers is rather impressive, though it's really difficult to get a better pic of it than the the one shown here because nearby buildings, walls and street furniture conspire to obscure the view.
I have attempted a bit of half-arsed research but cannot find any info about the company being at this location so I would assume this was just an advertising site. But, as you can see, it's quite a sight at this site because this sign is enormous – probably the largest one I know of – it covers the whole side of a house.
On close inspection it can be seen that there have been two ads here; one painted directly over the other.
'DAILY' can be just made out covering almost all of the upper third and there are remnants of blue and yellow paint visible at shoulder level, so I wonder if the latter sign was for Daily News who I have noticed implemented a bold heavy sans face on yellow backgrounds on their ads at other locations, such as on Seven Sisters Road near St Anne's Road in Tottenham.
The earlier sign shows the ad for Express newspapers with the titles rendered in the same style as their mast heads:
EVERYBODY READS
Daily Express
Sunday Express
THE PAPER FOR PEOPLE WHO THINK
(So that's not everybody is it? Ha ha!)

That same weekend I was delighted to find some new [to me] ghostsigns in north west London which I will post about next month.