I have for many years been photographing coal hole cover plates on London streets and have amassed quite a collection of different designs made by or depicting different companies.
Every now and then some contemporary ones are made to commemorate an area, as in the ones around Brick Lane, or written about in this book.
A similarly interesting set of modern replacements can be found installed in 2013 by Westminster Council along North Audley Street between Lees Place and Oxford Street where fourteen covers depict the different trades that used to be found along this street.
I managed to photograph eleven of them. The other three were being obliterated that day by chairs and people outside pavement cafes. 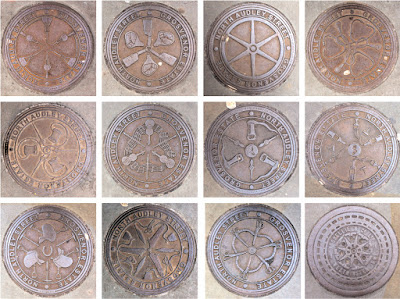 1) Apothecary, Butcher, Coach builder and Doctor.
2) Dressmaker, Musician, Publican (Vernon's Head) and Publican (Marlborough Head).
3) Saddler, Stationer, Tailor and one of two original A Smellie & Co Ltd, Westminster from the same stretch.
The ones I couldn't get to are Engraver, Watchmaker and Baker