A mooch around the meridian – Greenwich Peninsula and the O2

The plan was, as the tide was so low last weekend, to go and investigate the foreshore around the Greenwich Peninsula. But as we came off slip way we could see it was horribly slimy and muddy. 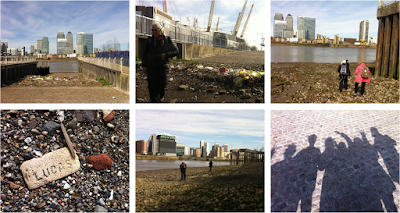 Jen, Brian and Malcolm ventured further along the water's edge for a bit but I decided it wasn't worth the effort as did Caroline and Liliana. We three waited by the mass of tide-swept rubbish which included far too many plastic bottles and hundreds of those shiny metal cream frothing capsules that are being used for other things these days.

We then walked clockwise around the O2 along The Olympian Way (part of the Thames Path) stopping to look at some of the "art" along the path. By which I mean most of it is rather confusing. These artworks, which are part of The Line, include some large mannequin arms that looked vaguely sexual, a sign with a big number on it, a section of a boat and an upside-down electricity pylon which, because as it's behind a fence in an area that looks like a wasteland/dump, I would have walked past without a second glance had Malcolm not pointed it out to me. Perhaps that's the point. I think it would have a better effect in a green field or in the middle of a London square. Oh, and the information plaques for most of these things are already broken/tarnished. Upkeep/maintenance lacking again.

Moving on... The view down onto the foreshore was lovely – sandy beaches, birds and grasses. Just don't turn round and look O2 and its adjacent buildings which, due to the high blue wire fence, resembles an American prison camp.
Intrigued about the plans for this area we ventured into the Now Gallery to see what we'd understood was supposed to be an exhibition showing how the peninsula will be developed in the future. The strapline is "Where Pioneers Live". That'll be the kind of pioneers who live in luxury apartments and use the Tesco Express and gym on the ground floor, rather than ones who have all their belongings on their back, clean their teeth with sticks and survive on baked beans and bad coffee.
Once inside the building we spent ages trying to work out what we were looking at. The 3D architectural forms that looked like jelly, wood and colourful perspex buildings looked like fun. I doubt that will happen in the UK. You only see that kind of vision in, say, Barcelona. Another white form  depicted the whole sweep of this swathe of land all the way to the City but I couldn't understand what it was intended to mean. It looked nice in a foyer kind of way, but why was it there? What was it supposed to be telling us? And how much had it cost to make? 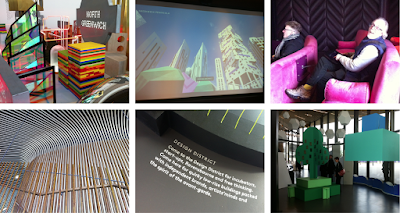 We entered the viewing room and spent ages trying to get the interactive CGI film thing to work on the tablet (well done Malcolm!) but it had no sound and we spent all the time in there laughing and jeering at the over-sized badly-steered boats, the 2D buildings, the unsupported red walkways, the giant birds and the enormous trampoline! It was fun, but ultimately rather confusing.
I spoke about all this to the girl on the reception desk who explained that this open-to-the-public walk-in area on the ground floor was just about concepts, but if we wanted to know what was really being planned we'd need to make an appointment to go up to the first floor. Aha! So they are keeping it all under wraps. I'd say we can expect another maze of homogeneous high rise glass with a few "iconic" tall things thrown in for good measure.
Hmmm... we then investigated the interactive exhibits to the left of the desk which were supposed to explain the different districts within the peninsula. It was like a playground for adults. And most of it wasn't working.
So we wandered back out into reality and walked the Thames Path to Greenwich.
But I'll save that for another day...