Tomorrow the price of 1st Class postage goes up by 30%.
I still think it's cheap. For 60p you can send send a letter to Scotland and expect it to arrive the next morning. I think that's amazing value. Try getting a private company to that for the same money.
But "First Class"... what does it mean? I think it used to mean it would arrive in the morning post rather than in the later delivery. But these days it's a bit tenuous. Here in Holloway my post rarely arrives before 11.30am. The next day delivery we have come to expect doesn't seem to work either, as often I've sent something with a first class stamp on it to hear that it didn't arrive until two days later, even just across London.
But then what do I expect for 60p?!
I still have a have a lot of stamps that I bought last December, albeit with Christmas images on them, that I never used because I didn't find the time to make any 2011 Christmas cards, so it's a good job they don't have 'use by' dates on them.
Below are some interesting letter boxes on London doors. More here. 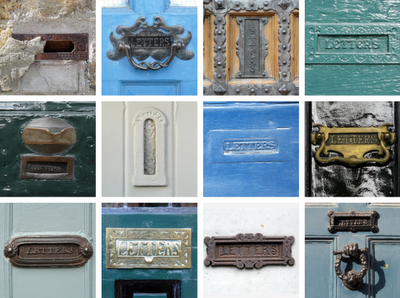