These wonderful ghosted advertisements are mainly to be found on the sides of shops and buildings along old high streets. Here is just a small selection.
A larger collection of my photos of ghost signs, and other things that interest me, can be found at www.flickr.com/photos/janepbr 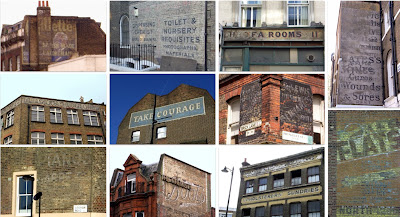 Shown above are:
Gillette in Commercial Street E1;
Wootons Cash Chemist in Richmond Avenue N1;
tea rooms in Museum Street WC2, Bate's salve ('...cures wounds and sores' which overprints an earlier one for '...Kings citrate the original safe and best') in Regent Square WC1;
The front of a building owned by Miller Beale and Hider Ltd glazing contractor which appears to read 'builders...' over/under another sign I can't quite read in Greenland Road NW1 (I now have better photos of this building and will upload them soon);
Take Courage just west of Borough Market SE1;
Bernard' s mens hosier, hatter (and something else I can't make out) which overprints an earlier sign for P(?) Lewis in Brick Lane E1;
pianos and carpets just off Hornsey Road N7;
Boots in Camden High Street NW1 (you save vouchers by shopping at Boots);
upholsterer's sundries in great Eastern Street EC2;
Key Flats in Caledonian Road N7