Summer Show 2021 and Late Constable at the Royal Academy

I've seen a lot of art these past few weeks. And it's all good.

Last week I went to the Royal Academy Summer Show which this year is not restricted to a few weeks in the summer . It's a riot of colour and sort of reflects all the street art and road crossings that are brightening up the City at the moment.* I also like that this year's show has a greater percentage of textured, textural, handmade pieces such as collages and interesting things made out of found, recycled or collected objects. 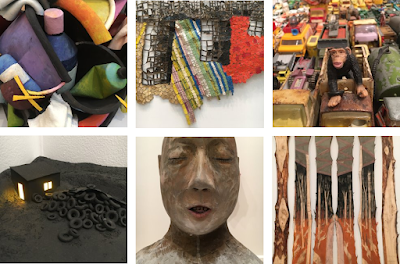 So absorbed was I that I only took a few photos and these include, top left, a sculpture by an artist friend, Jaana Fowler. I couldn't take a snap of my mate Johnny Bull's framed print because it was set so high on the wall – hey JB; well done re all those red dots!

And so to the small, but very absorbing, Late Constable exhibition at the RA which I visited on the same day as the Ron Mueck show in nearby Dover Street,

This interested me because I really like John Constable's sketches and preliminary work, more than I do his finished paintings which I often find a bit over-egged, chocolate boxy and twee. This show has some marvellous before and after comparisons (guess which ones I like best!) and lots of his weather studies – rainbows, storms, clouds etc, which reminded me of my A-Level art years when I was trying myself to master a decent cloud-painting technique, with an idea to produce an indulating old-style rollercoster (man made) against a backdrop of cumulonimbus (nature). I never quite got the hang of the clouds and I sort of gave up. Instead I made a simple graduation in the background that I wan't really pleased with. I must have dumped the lot or left it all in the plans chest there because, having just looked through my 6th form sketchbooks and other works I have saved from that era, I can't find any ref of that at all, and I now wish I'd been able to view Constable's efforts when I was a teenager to see how he too struggled to capture the ever-changing Great British sky. 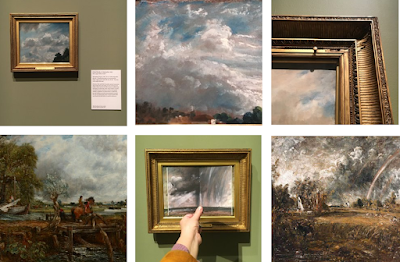 It wasn't just the paintings and sketches that intigued me. We were at first perplexed by the studs and sliders on some of the frame (top right, above), something that we'd never noticed before but surely must be reasonably commonplace. We decided the sliders must be the closing mechanisms and the studs must be little handles to enable the front section, including the glass, to be flipped forward to allow the canvas to be loaded from the front, rather than from the rear which how modern frames are constructed. Please correct me if you know better.

There's plenty of time to see both exhibitions – The Summer Show runs until 2nd January 2022 and  Late Constable until 13th February – both ticketed. However, there are galleries and exhibitions at the RA that are free and well worth a visit. I'd particularly recommend the Collections Gallery on the first floor at the rear (easier via the Burlington Gdns entrance) where there are some marvellous artworks. Also, in the low level linking corridor adjacent to the toilets and lovely cafe, there are some absoultely stunning pieces of sculpture. Find out what's on at the RA here.

*Tbh, I'm not eally keen on those colourful crossings – the ones outside the RA along Piccadilly are looking really mucky these days. There's a good reason roads are a grey colour!