Heading down Tottenham Court Road on a bus in early March this year, I noticed that Habitat had moved out. Oh dear. I got off the bus to take a few snaps. The exterior signage had been removed and the interior was being stripped. The lovely curved display windows that run around the shop on both sides were covered in dust. 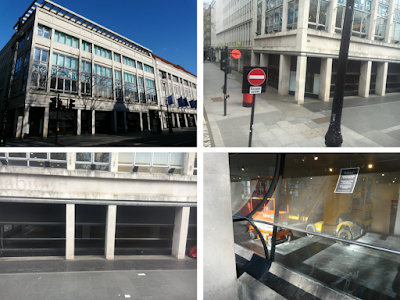 The windows around this part of the building are double co-joined curves – an expensive innovation, but this design allows the products to be seen clearly rather than be hindered by reflections from the street. The glass would have been installed in the late 1930s by Pollards, the go-to shop-fitting company of that era who had 'imported' this curved glass idea from the US.

I went back in April and took some more photos. With all the furniture removed this gave clear views across the store space of the windows. Really good infitity shots are to be had from the exterior where mirrored end panels along the top sections repeat the curves. 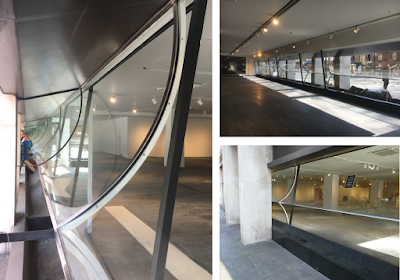 I recall there also used to be curved windows along the Heals section of this TCRd site – those curves were replaced with boring sheet glass c2000 (I didn't take pics or note that down specifically).

This got me thinking about how unusual horizontal curved glass panels are these days. I can only think of three other locations in London where they are also installed, and they are all slightly different:

Fox Umbrellas, London Wall, Moorgate, established in nearby Fore Street in 1868 – as I understand, this is the first site where this curved glass was installed. It's really hard to photograph, especially when the place, which is today a cafe bar, is closed during lockdown or open with people sat in front at tables. The double curves here are shallower than at the other three sites, not so deep. I haven't a clue what those blobby bits of art in the window are supposed to be. As well as the windows, the Fox umbrellas shop, still retains many of the early C20th interior wood shop fittings. Pre-this Jazz Age refit, the display windows would have looked something like this at James Smith & Sons, New Oxford Street. 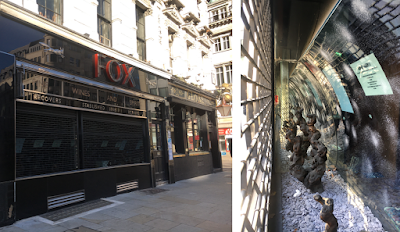 And then, of course, we have what is possibly the best-known example of these windows at Joseph Emberton's marvellous building for Alexander Simpson, a stone's throw from Piccadilly Circus. It opened in 1936 selling Simpson's range of men's clothing and is today home to Waterstone's bookshop. Here we a have a row on single deep curves, again with the mirrored ends. During the Christmas 2018 period part of the windows were damaged and suffered huge cracks, as shown below protected by thick adhesive plasitc sheets. This being a Grade I listed building, the glass has since been replaced. Phew. 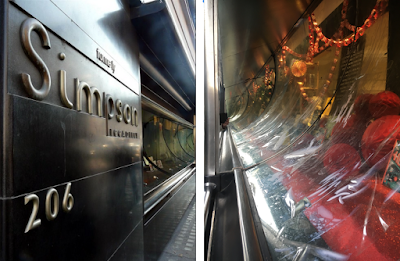 At the far left hand side of the Piccadilly-facing windows, near the Simpson sign, embedded into the chrome handrail, the Pollards London name and 'patent invisible glass' along with two patent numbers can be found. Which reminds me that I must return to the other loactions to see if the same mark is somewher on those façades as well. 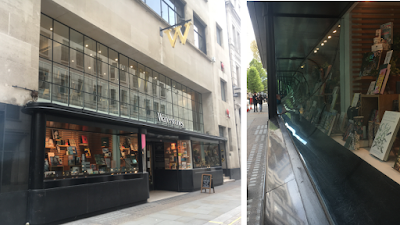 And the fourth/last London example, unless someone can tell me where to find others, is on the old gas showroom on Crouch End Broadway, today home to Barclays Bank, where there are double shallow curves along both sides of the building. 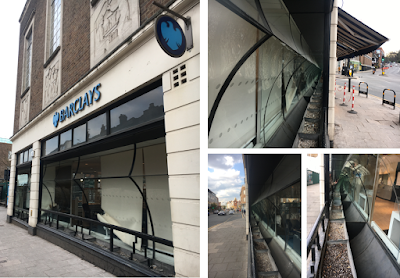 Also note the eight beautifully-carved panels carved by Arthur Ayres that run around the building at higher level depicting the many different things that gas power can do for us.