This basically means drink a bowl or cup of mulled wine whilst cheering in the new year.
It's an old pagan festival thing.
My friend and I were luck to happen upon a troupe, if that's the right word, of mummers near Millennium Bridge on Sunday 6th Jan and so we stuck around near The Globe to see what might evolve. And I am so glad we did that.
The Lions part put on a fab colourful Twelfth Night show and, just like those that would have been put on in George III's reign, it was satirical referencing the past year's events with a peppering of rude and lewd extras.
We then ended up getting caught up in the throng and 'danced' a farandelle through Southwark's riverside streets to end up The George Inn on Borough High Street.
What an absolute delight. Though I am not sure that drivers of the the cars who had to stop to let a long chain of people cross Borough High Street were that amused!
My prediction for next year is to go to wassailing again, tho this time I will have to tae a flask of warm alcohol as we got nary a sip. 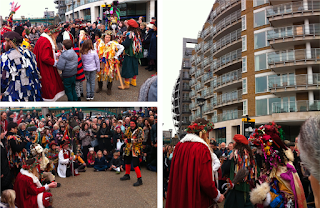 What we did notice when watching the play was that in all the riverside flats above there were only two people at one balcony watching the show. I am pretty sure no-one was at home in all the other apartments. Does anyone actually live there? I suspect the owners just use these places as somewhere to crash mid-week.
Anyway...
Let's raise a warming glass to happy new year...!!