Men with no hands and legs in N4

This might be deemed a bit flippant considering the stretch of pavement I am about to refer to has become a makeshift shelter for homeless men (and women?), but this is something I noticed before the rough sleepers arrived so please bear with me... 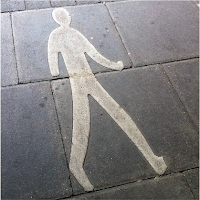 I am often amused by the shapes of stick men painted on pavements to indicate footpaths. Very often they are disproportional with huge feet or short arms, or both as per here.
Well, there are lots of them under the railway bridges at the southern end of Stroud Green Road near Finsbury Park Station.
These N4 men are reasonably human-like vis-a-vis the head-to-body ratio, though their arms look a little short and they all have one foot much larger than the other. I think there must be about twenty of them indicating to keep on the left.
But most of the poor fellas look like they have returned from active service in a war zone. The one shown here to the right has only lost a hand and half his foot but as you can see from the six pics below most of his comrades can barely walk at all. 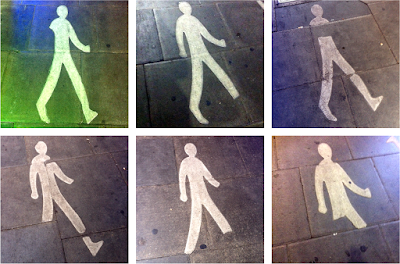 It's really sad – especially as alongside these graphics there are real broken men.