Melancholia: A Sebald Variation – an exhibition at Somerset House

Melancholia: A Sebald Variation is a marvellous thought-provoking exhibition hidden away in the Inigo Rooms within the East Wing at Somerset House.
It's really worth checking it out. I stumbled upon it by accident last month and ended up spending quite a while in there. 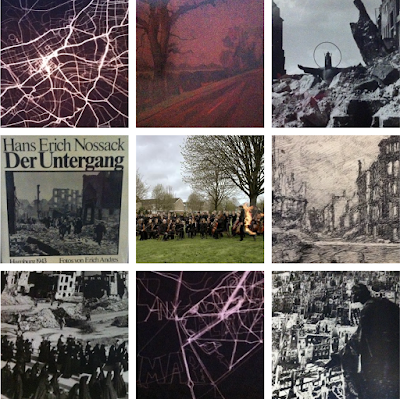 The exhibition, presented by King’s College and curated by John-Paul Stonard and Lara Feigel, takes the writings of W.G. Sebald (1944-2001) as a starting point for an exploration of melancholia in European art and culture. Inspired in particular by Sebald’s 1997 publication On The Natural History of Destruction, this exhibition sees works by international contemporary artists set alongside images documenting the destruction of Germany in WW2, as well as W.G. Sebald’s own manuscripts and peculiar photography collection.
Highlights include: Albrecht Dürer’s famous print Melencolia I (1514) which is on loan from the British Museum, never before exhibited photographs by Anselm Kiefer, made in the 1980s, depicting aircraft constructed out of sheets of lead taken from the roof of Cologne cathedral,  Tacita Dean’s Our Europe and eye-witness drawings by Wilhelm Rudolph of the smouldering ruins of Dresden here in Britain for the first time. There are also some works that have been specially commissioned for the exhibition.
Make sure you have the time to watch Guido van der Werve’s award-winning endurance-art film project Nummer Vierteen: Home, 2012 – a fabulously compelling piece that lasts 50 minutes – it's worth finding out what time the screening starts so as to be able to see it from the beginning. And I'd also recommend taking time to watch the video of an interview between W.G. Sebald and Susan Sontag.
Until 10th December
Tues–Sat: 11:30–17:30
Wednesday lates until 19:30
Sundays 14:30–17:30