Well, I thought I'd seen more or less every kind of boot scraper there could be, but walking through Temple, St. James' and Belgravia during the past week I have found lots more really good ones. Some of the Temple ones, shown here in the top two rows, are so simple and understated; almost like they are only half there as they disappear into walls. Along Whitehall I found a pair either side of the doorway to The Parliamentary Counsel that, unusually, face the street rather than each other. But then again, if they were perpendicular to the wall then people would trip over them. There must have been H&S reps even in those days! I am particularly fond (fond? bootscraperspotteritis setting in here) of the curved corner versions, and the really simple straight ones like the dark one on the bottom row, which can be found just off Belgrave Square. 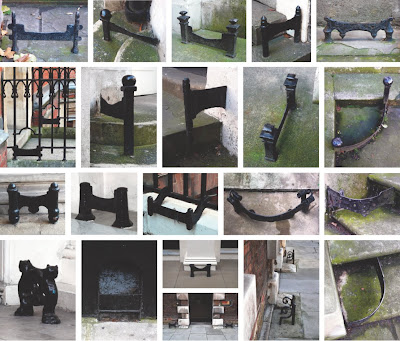